When you are on the links and it’s windy. Conventional wisdom states you should tee the ball lower to keep the ball out of the wind.

Today the guys over the Tour Experience Golf (TXG) released a great new video that demonstrated how that idea might be hurting your game. Leaving you further back than you could have been if you just let the ball fly.

This certainly gave me something to think about in my own game.

In theory the idea of teeing the ball low to keep it out of the wind makes complete sense. What this video showed though is teeing it low causes the ball to launch low and with more spin. Most people know that spin is your enemy in the wind, but why does it spin more?

Their explanation is that it that a low face strike causes the face to deflect downwards and the gearing affect creates more spin on the ball.

Compare that with teeing the ball a little higher hitting the ball more in the middle of the face. The ball launches higher with less spin, optimal for getting more distance.

I might not have actually believed it still, but the data speaks for it self.

The only thing to note in all this. This is only for hitting your driver. Because of the bulge and role you have a gearing affect. Hitting a low stinger with with a driving iron won’t have the same issue.

Why the new flagstick rule might not speed up play

Masters Memories: 8 of my favorite 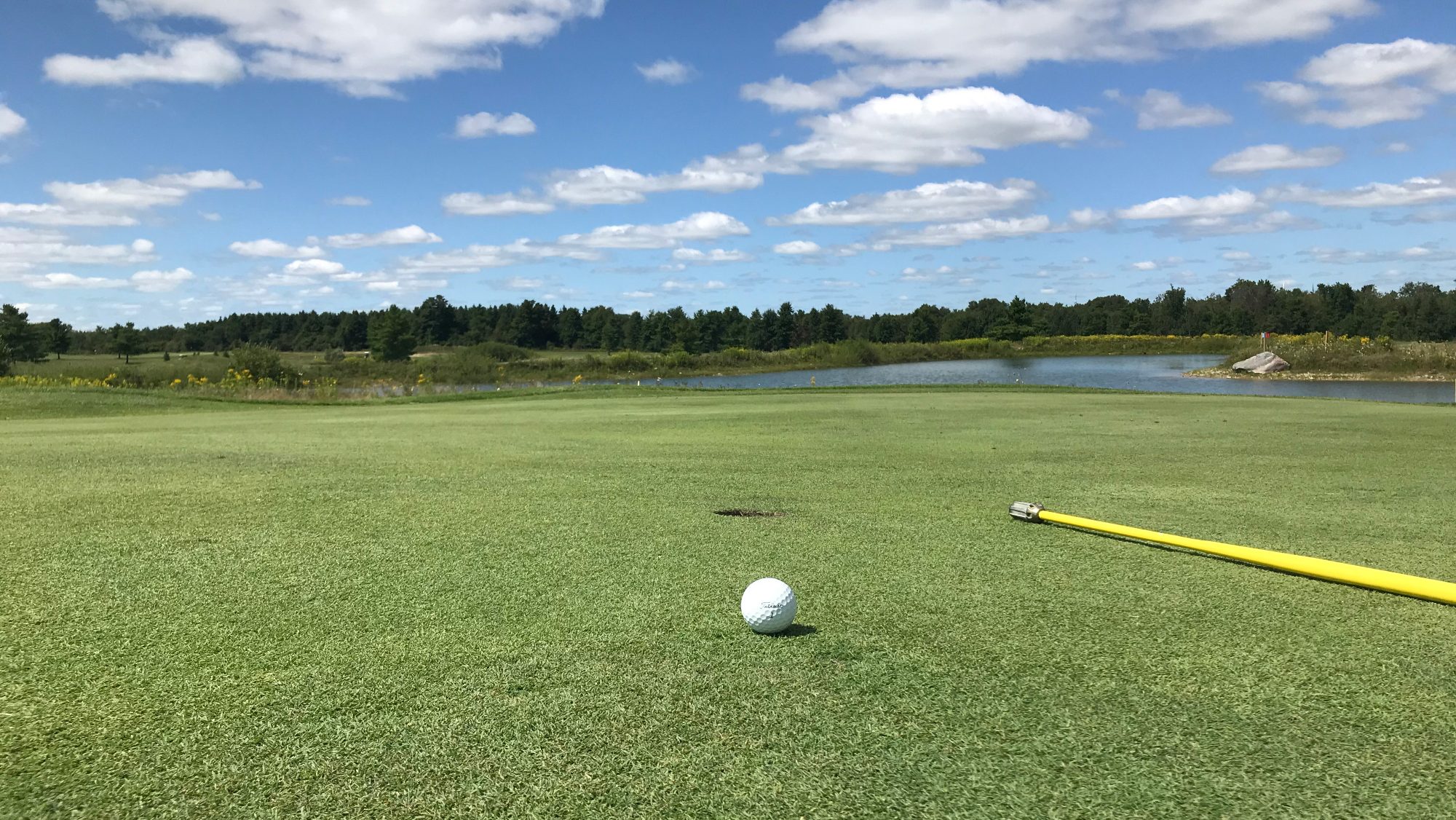 This year started with so much promise. Everything was pointing towards a great season on the greens. Least of which I wasn’t going to be pulling the pin because the new rule that would allow leaving the flagstick in the hole.

See I’m a big believer of the scientific method, so when I saw these results from the guys at MyGolfSpy, it was clear to me. The pin stays in! 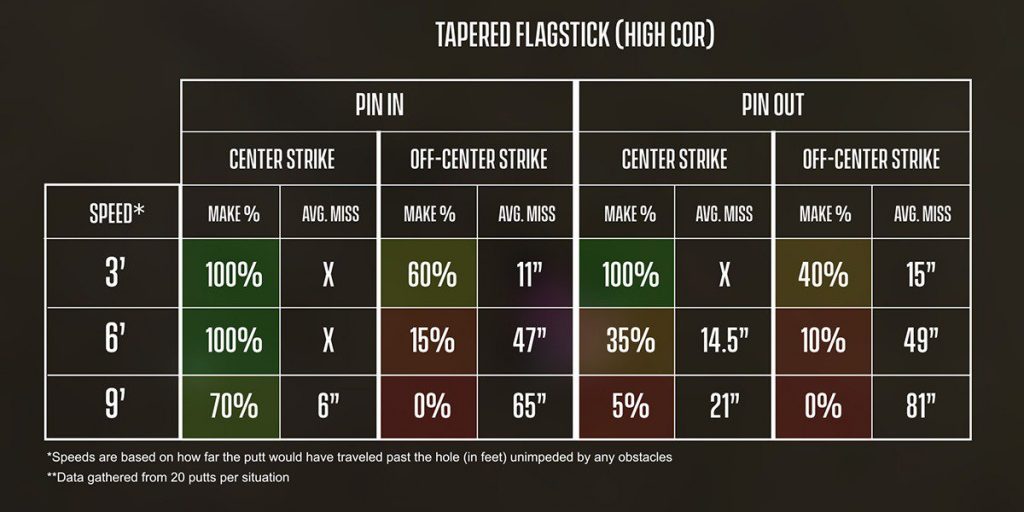 But here is what the test missed. These results assume that you hit the hole/pin.

Now it’s not all bad. Anecdotally I think not pulling the pin has helped with my lag putting. The pin gives me a much better target to aim for and get my first putt nice and close. Well, maybe close enough, or what should be considered close enough. But more on that next. So, for now, I will continue to leave the pin in for longer putts.

But here’s the rub. When I am faced with a 3-5 foot putt I have been missing way too many. And I think I know why… or at least it’s what I have come to believe. When I stand over a short putt the goal is to hit the back of the cup with a confident stroke. However, when the pin is in I think subconsciously I fell I need to now enter one of the sides because the hole seems to look a little smaller.

For a more concrete example, let’s looks at my recent club championship rounds where I left the pin in for almost every putt. Hoping that it would give me a competitive advantage. Instead I now believe it may have been a competitive disadvantage.

Looking at these numbers it would be easy to assume that the first putt lengths were longer. And that might be right, but when looking at my second putts there were usually 3 feet. In my opinion, well within the range of must make. If I could just hit the hole, as the MyGolfSpy data suggested.

Of course it must be taken into account that these putts weren’t always flat. But each time I felt like I hit a good put but I would constant lip out. 5 times in fact, in the second round. And 4 times in the first. But it was certainly more pronounced (read, aggravating) in the second.

I have and still find it helpful to leave the pin in for long putts. So I going to remain leaving the pin in there. If not just to speed up play like the USGA had originally intended.

On short putts of around 3-5 feet I will be pulling the pin from now on. Right or wrong, this will be my latest experiment to see if I can turn this bus around. #no3putts 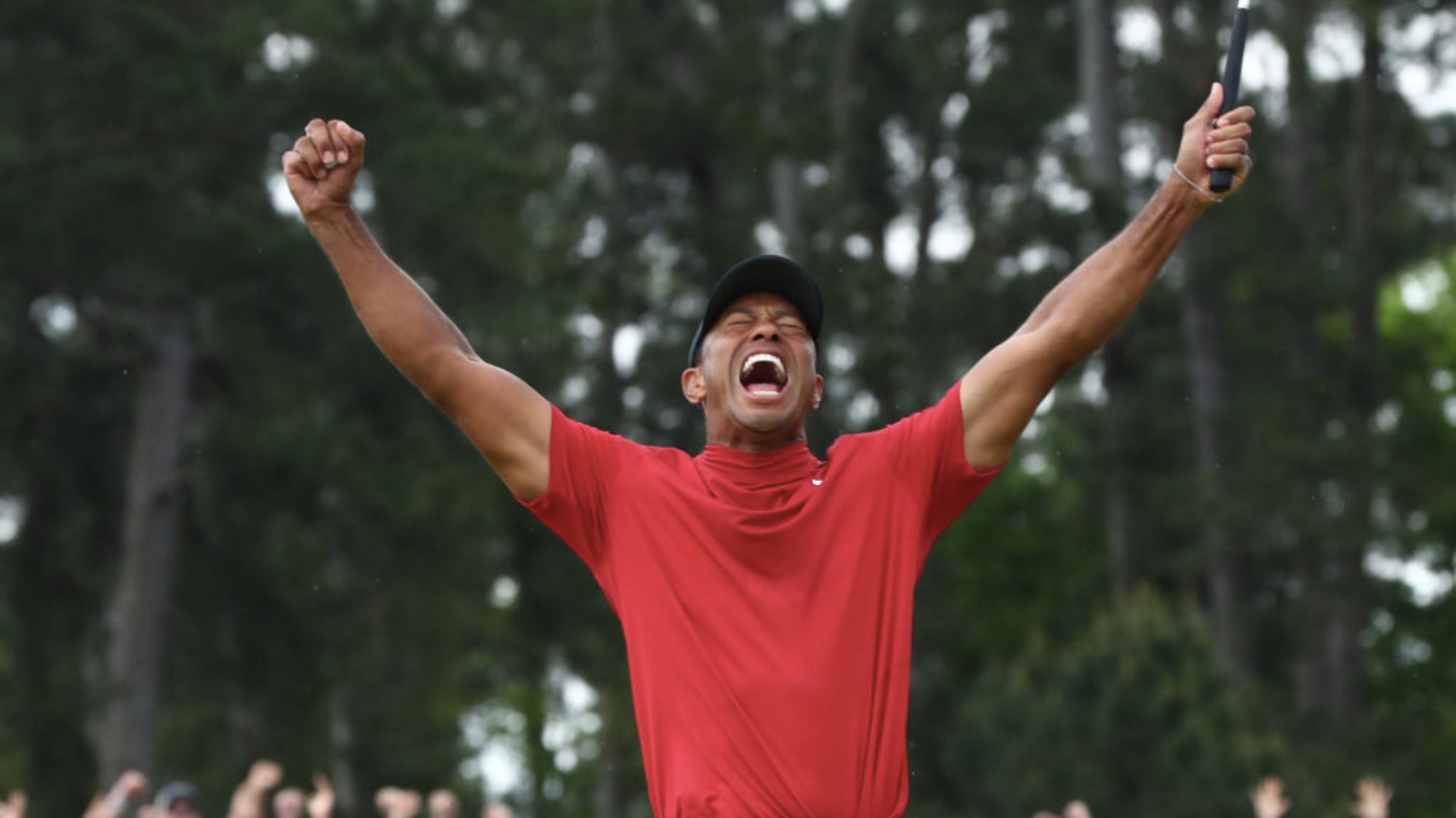 With the final putt by Rory McIlroy, we have only the second repeat FedEx Cup Champion. Having hoisted the final trophy the 2018-2019 PGA season has come to a close. And what a season it was! Let’s take a look back.

Not sure if you heard but the rules of golf changed this year… and it produced some really great storylines.

To leave it in, or pull it out?

Of all the rule changes this was probably the biggest. Would leaving the pin in for a putt help the pros make more putts?

The rule immediately divided the tour. You had players like Bryson DeChambeau and Adam Scott say they would use the pin to their advantage. And guys like Justin Thomas and Brooks Koepka say they would always pull it.

And then science came into the conversation. MyGolfSpy released their findings from an experiment that showed that leaving the pin in would help you make more putts. Not to be outdone Golf Digest released their own independent study that showed the opposite. What was a golfer to believe?

Given that the rule was originally created to help speed up play, I wonder if the governing bodies will reconsider making adjustments to the rule.

At the end of the day, these guys on tour are already such incredible putters that it likely wouldn’t have an effect. I think it was really just a crutch for those guys trailing in the putting category.

If you would have told me before the start of the season that the new rule to drop from knee height, was going to cause such a stir. I’m not sure I would have believed you.

But it certainly did…

Both Jordan Speith and Bryson spoke out about how absurd the new rule is. But then Rickie Fowler took a penalty for a bad drop. And then he responded as only Rickie can #savage!

With a year of this new rule out of the way, I don’t expect much more talk about it. The knee drop did feel weird the first few times. As I’m sure dropping from shoulder height did for those guys who had to drop it behind their backs.

Should Kuch have just paid his local caddie as he would have his regular looper? Yes.

Did he think he was going to make it better by trying to explain his reason for not? I’m not sure. But it became clear pretty quickly it didn’t. And in the end, he paid up. However, his reputation may have taken a bit of a hit.

I know one person who didn’t want to let Kuch forget… the FedEx Cup Champion!

This year’s Masters was one of the moments in sports history when you remember where you were when it happened. Tiger winning his 5th green jacket was truly special. And up until the second 9 on Sunday, I’m not sure if anyone really thought it would be possible. Well, maybe this guy did.

After the first 2 days, there were a bunch of Major champions within 3 shots of the lead. It was really anyone’s tournament.

I don’t think I will ever forget that moment when you realized that Tiger might actually win his 15th major. The second 9 on Sunday was such a special 9 holes. Of course, it was shocking when Brooks, Tony Finau and others in contention for the lead rinsed their tee shots into Raes Creek on the 12th hole “Golden Bell”.

Then, like out of a movie. If there wasn’t already enough drama, Tiger almost makes a hole-in-one on the 16th hole with Michael Phelps watching behind him. So amazing!

Finally, there was his reaction after making his putt on the rebuilt 18th green. Tiger said the putt didn’t move the way his past experience led him to believe. And as he walked behind the green he shared an amazing moment with his kids, which many contrasted with his embrace with his Dad Earl. As I sat there in shock about what I had just seen, his words from his interview at the start of the week struck me. “I don’t need to win… But I really want to”. Yes, yes he did.

The next day after I woke up and knew it wasn’t a dream. I was left thinking about what this means for the rest of the year. Could this be the year he breaks Jack’s record? Everything seemed to be lining up. He had won majors at both Bethpage and Pebble Beach, and he could always find a way at The Open. Ultimately, it wasn’t meant to be and he struggled much of the rest of the season. But there was still no doubt. Tiger was back!

There is no denying that Brooks Koepka is a major player. Yet I still don’t think he gets the respect he deserves. But I don’t think people expected Brooks to come out with such a demonstration of confidence.

First, he was quoted in saying that “majors are the easiest ones to win”. Then he said “I just practice before the majors. Regular tournaments I don’t practice”. Putting a bad taste in the mouth of some. But at the end of the day, you can’t argue with the results. With back-to-back US Opens, almost making it a three-peat with a runner up finish at Pebble this year. Back-to-back PGA Championships, by destroying Bethpage Black. Rounding out his major season with a T2 at the Masters, and T4 at The Open. It was one of the best single year major performances in recent memory.

Given that in the other 16 non-major events that he played in, he finished on average in 31st. So it’s clear where his priorities lie. And yet he is still first on the PGA Tour Money list with 9.68M (before the Tour Championship). So it looks like his strategy is working, and I think we should all leave well enough alone.

Why not make some early predictions for the next PGA Tour Season which kicks back off next month at The Greenbrier. But I don’t think you will see most of the big names until at least October. But here a few predictions:

What are your predictions? Leave a comment down below.

Kids golf – How to get your kids started